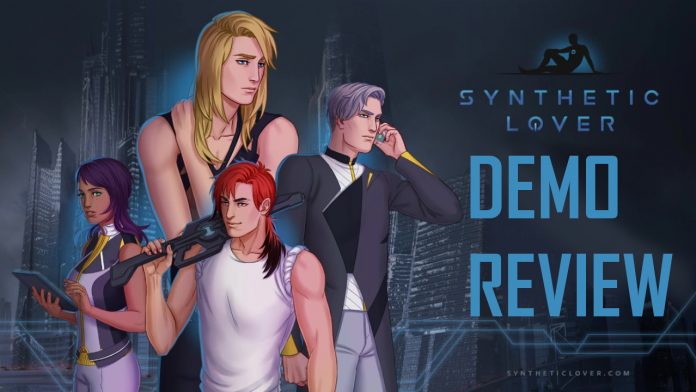 We have a new game to show you guys! Synthetic Lover is a game by developers Knight of Hearts, known for their BL games on itch.io. In the story of Synthetic Lover (at least the demo), you can imagine it would be based on sci-fi. You’re not wrong. You follow the story of our escort android after an incident involving his recent autonomy. He feels things that androids wouldn’t feel, all because of an incident involving a bartender using a strange device. Right now they are running a kickstarter campaign and, long-story short, I think it’s worth supporting. So I encourage you guys to come and help them out by supporting their campaign. This game has a great premise and already they’ve proven themselves with the game’s style and system. Allow me to go over some tangents here: the Synthetic Lover Demo helps set up the premise without giving away too much. It teases what’s at stake and what else is underlying without spoiling us too much. I love the premise of it in itself since I’ve always been a sucker for sci-fi games. And this game offered a lot of world-building without the heavy exposition, which I loved. The dialogue was also smooth and featured a colorful cast of characters. Each character offered their own flair, which made me smile. Even the would-be side characters had a lot going for them and the self-reflection of our favorite android. And practically each line had voice-acting! It was a pleasant surprise and one that I cannot help but give a standing ovation for. Despite the robots, none of the dialogue felt lifeless, and experiencing the game itself felt like an absolute treat. Now for UI and controls. UI was decent. Control scheme suffered only due to a renpy error that my hardware had with most ren.py enginges (even To Trust an Incubus had the same errors. And the earlier Camp Buddy Demo). So really, this was no surprise to me. But it might be off-putting to you guys. Rest assured, I’ve tested this on another friend’s PC and it works magically. Ridiculously so. It was SO SMOOTH DAMMIT. Long-story short, it works fine elsewhere. Just not on mine. (I’m still trying to troubleshoot it, honestly). Soundtrack was not grating at all, either. Everything meshed well for the demo, so I have high hopes for the full game itself. If you want to have a see for yourself, make sure to get the demo via their itch.io or kickstarter and help their kickstarter campaign. For me, I think it will be a worthwhile treat.
Want more Yaoi and LGBT content? Take a second to support TheCaliMack on Patreon!

Moving my popular serie to PHub and my website

I LOVE YOU COLONEL SANDERS! Masterlist